About myself and Cat Pretty 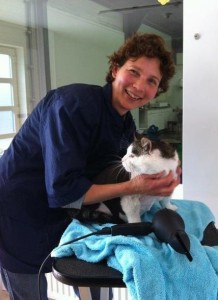 Just passed the final grooming exam! With my model for the shaving test, my cat Spetter.

I am Saskia Heijboer, cat person, cat lover, and also the person behind Cat Pretty.

I grew up with cats. There was a house cat around when I was born in 1963 and my life has been filled with cats ever since. Not only my own cats, also stray cats, barn cats at my horse riding address, cats of neighbors and the rescued cats in the animal shelter.

One of the barn cats was Murphy, a (partly) Persian cat, and I took care of her coat for about 10 years. She past away of old age in December 2013, but she actually was the first cat I ever groomed. Her fluffy coat matted quite easily.

With Murphy, the Persian barn cat, 2 months after her first real grooming session (I had to shave her).

I also noticed that coat problems occur in other kinds of cats; old cats had little felted knots all over, felted mats on the backbone of chubby cats. I took care of these problems in my own clumsy way, but I wanted to do it better.
In The Netherlands pet grooming was still mainly focused on dogs, so I started to look for places where I could learn how to groom especially cats. There were only a few grooming schools that offered short workshops. One of them was at the Martin Gaus Academie, connected to the Martin Gaus company (a.o. dog school, animal behavior experts, animal hotel). I decided to take part on their workshop and after that I also followed their new complete vocational training; a program to become a Professional cat groomer (grooming cats without sedation). And now, since May 2012, I am a certificated Cat Groomer and the proud owner of Cat Pretty, grooming service for cats in Amsterdam Southeast and surroundings.